Enjoy the sense of freedom and the vast views from the heights of the Preseli Hills, which narrowly escaped becoming a permanent military training ground.​

The story of a brave warrior’s quest for his beautiful bride on the wild and rugged Preseli Hills.

A boar is a kind of wild pig. And wild pigs were once common across this land, living in forests and other wild places. A male boar was a vicious creature; fierce, savage and deadly.

It could grow large, it had sharp teeth and tusks and it was usually hunted by knights on horseback, or by men with very long spears. Hunting a boar was a dangerous task, fit only for the strongest and bravest of people.

Twrch Trwyth was a gigantic boar. He stood as large as a battlehorse, and his eyes burned like the flickering flames of a winter fire. His fur was thick, and each hair was as thick and wiry as the willow wands growing by the River Nevern.

Now, it happened that there was a brave warrior called Culhwch. He was a noble man, as kind as he was brave, and he had fallen in love.

The love of Culhwch was the fair Olwen, daughter of the giant Ysbaddaden. Ysbaddaden was determined that no man would claim the hand of his beautiful daughter without first proving himself worthy, and so he set Culhwch a challenge.

Ysbaddaden said, “Throughout the world there is not a comb or scissors with which I can arrange my hair, except the comb and scissors that are between the ears of Twrch Trwyth. He will not give you these things freely, and you will not be able to take them from him.”

Brave Culhwch bowed to Ysbaddaden, and promised that he would seek out Twrch Trwyth, and win from him the magical comb and scissors.

So, Culhwch set forth with his knights and his horses and dogs. The pennants on the knights’ lances snapped in the breeze, and the sound of the baying of the hounds carried far across the land.

Before long Culhwch came to the town of Haverford by the river Cleddau, and learned that Twrch Trwyth had been seen close by, attacking the farms to fill his great belly, and killing any man or beast who tried to stop him.

Culhwch led his men from the town and at the sound of his hunting horn, Twrch Trwyth gave a great bellow and fled to the Preseli Hills, hiding in the misty woods and quiet cwms, where only the trickling streams could be heard.

But on came Culhwch, harrying the great pig, and driving him from his lair. Through Nevern and Cwm Cerwyn charged the boar, and on one of the hills of the Preselis the pig was able to run no more, and made a stand against Culhwch and his men.

Great was the battle that followed. Twrch Trwyth flicked his head to the north and the south and his tusks caught men and hurled them from their saddles.

With a dash to the east and the west he drove away the dogs of Culhwch with his sharp teeth, and sharper hooves until only Culhwch faced the great beast.

Warily the two of them circled one another. Each panted heavily and sweat ran down the face of Culhwch and also down the hide of Twrch Trwyth. Then came a final melee. As man and beast came together, a sword swung, tusks flashed in the evening light and with a great squeal Twrch Trwyth fell.

It is said that when Twrch Trwyth fell, the very hills of Foel Drygarn and Foel Cwmcerwyn shook and the Lord Ysbaddaden in his castle felt the tremors beneath his feet. And then he knew that Culhwch had slain the great pig and that he was worthy of his daughter, fair Olwen. 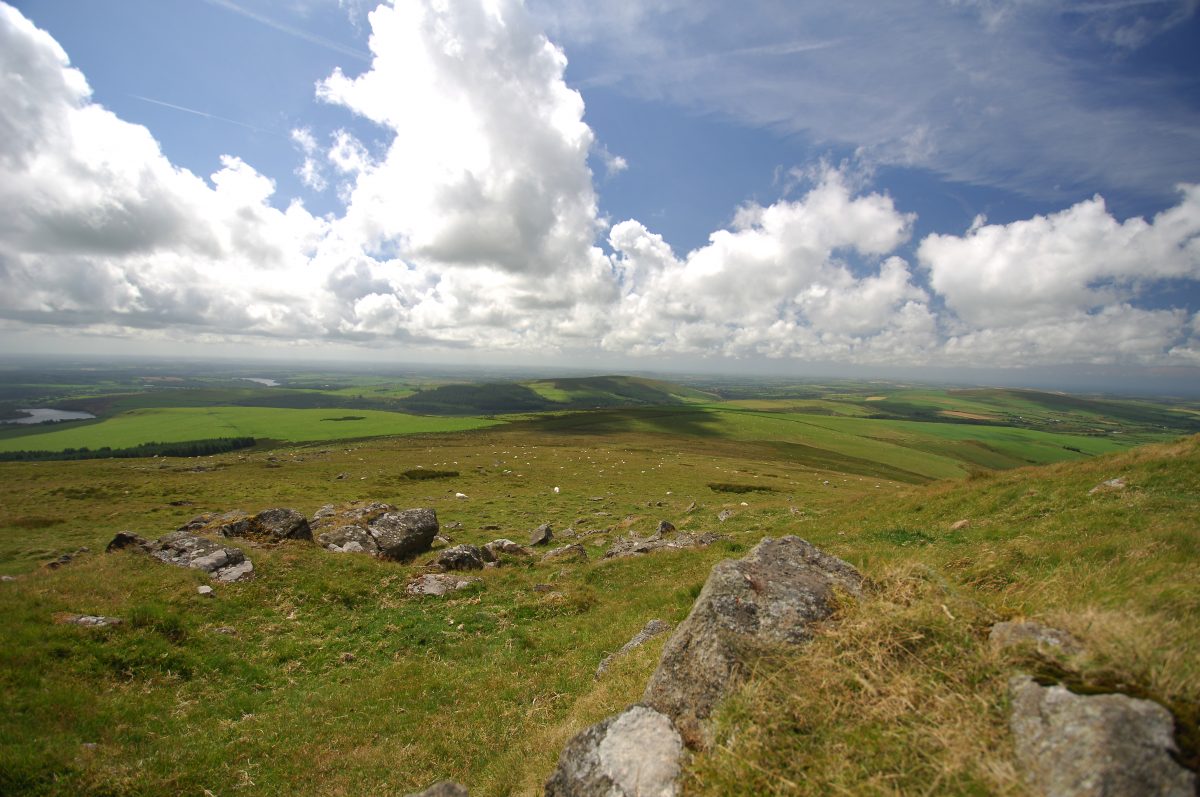 The Battle in the Sky

A story of strange happenings in the sky on the western edges of the Preseli Hills.

Once upon a time there was a whitewashed farmhouse on the bleak and windswept slopes of Mynydd Morﬁl. It was inhabited by a farmer, his wife and two young sons. They made their living as shepherds, tending their ﬂocks on the wild moorlands round about. One evening the farmer went out onto the hills with the two boys when the strangest thing happened.

The sun was setting over Mynydd Cilciffeth and to the east great clouds were piled up over the summit of Foel Eryr. A golden path seemed to be laid across the sky by shafts of light from the setting sun. Suddenly the clouds darkened and a gust of wind disturbed the silence.

Then a distant sound like thunder rolled over the hills. The shepherd thought it was thunder, but then he realised that he was hearing the sound of galloping horses’ hooves – thousands of them, thundering across the sky and echoing through the darkening valleys and hills.

He could hardly believe his eyes when he looked to the northeast and saw that a battalion of foot-soldiers was marching over the horizon, seeming to come from the base of the clouds which now masked the summit of Foel Eryr.

He could see their shields, armour and spears glinting and gleaming in the golden rays of the setting sun. He could hear a drumbeat as the soldiers marched steadily on, and then he saw the mounted soldiers too, holding back their horses as the army advanced.

The shepherdʼs two sons were looking in the opposite direction, transﬁxed by what they saw. “Look, father!” they shouted. “Look at Mynydd Cilciffeth!” The shepherd turned and he too saw that over the top of that bleak moorland summit came another army, rushing at full speed towards the foe.

Again there were foot-soldiers and horsemen, and again their weapons and armour ﬂashed as they came out of the setting sun. The watchers felt their blood run cold as they heard the whine of thousands of ﬂighted arrows overhead, and then the yells of the soldiers as the two armies joined in battle.

As the silver-edged clouds raced overhead the shepherd and his sons saw ﬂails, swords and battle-axes used to terrible effect. Metal clashed with metal. Horses reared up and fell, mortally wounded. Men engaged with one another in bloody conﬂict.

Shields and helmets were battered or split. Long spears and darts arched through the air, and men screamed and shouted, some in triumph and others in agony. The battle was ﬁerce and bloody, and lasted for more than an hour as darkness fell.

Then a huge ﬂash of lightning split the sky as black thunder clouds closed in above the mountains, and a torrential downpour swept across the landscape, accompanied by daggers of lightning and deafening peals of thunder directly overhead.

The shepherd and his sons had never experienced such a storm; they found shelter beneath a rocky crag, and there they remained for more than an hour.

At last the rain stopped and the clouds cleared, and the three made their way homewards in bright moonlight beneath a velvet sky. The storm was remembered for many years by others in the locality, but the shepherd and his two sons were the only people to see the phantom battle.

They never forgot it, and the memory was passed down from generation to generation. Two centuries later the little whitewashed farm on the ﬂank of Mynydd Morﬁl was abandoned and reduced to a pile of stones lost amid the heather and gorse.

Wall of my boyhood, Moel Drigarn, Carn Gyfrwy, Tal Mynydd,
In my mind’s independence ever at my back;
And my floor, from Witwig to Wern and to the smithy
Where from an essence older than iron, the sparks were struck.

And on the farmyards, on the hearths of my people
Wedded to wind and rain and mist and heathery livrocky land,
They wrestle with the earth and the sky, and they beat them,
And they toss the sun to their children as still they bend.

For me a memory and a symbol – that slope with reaping party
With their neighbours’ oats falling four-swathed to their blades.
The act they took for fun at a run, and straightening their bodies,
Flung one four-voiced giant laugh to the sun.

And this was my window – these harvestings and sheep shearings.
I glimpsed the order of a kingly court.
Hark! A roar and ravage through a windowless forest.
To the wall! We must keep our well clear of this beast’s dirt.