Puffins proudly walk alongside the footpaths, guillemots and razorbills fill the air with their chatter, while seals moan lazily from the shoreline.

Skomer has the largest and most accessible colonies of seabirds in southern Britain. The cliffs are wall-to-wall seabirds – fulmars, razorbills, guillemots and kittiwakes. Puffins nest in burrows in the cliff-top turf, herring gulls and great black-backed gulls on rocky outcrops, lesser black-backed gulls on the plateau. The noise, smell and breeding activity continues night and day.

The island has more than 300,000 pairs of Manx shearwaters, possibly the largest colony of this species in the world. Feeding out at sea by day, they return to their burrows at night, heralded by their unmistakable eerie cries which once gave Skomer a reputation as the “island of lost souls”. Staying overnight on Skomer is an unforgettable experience. 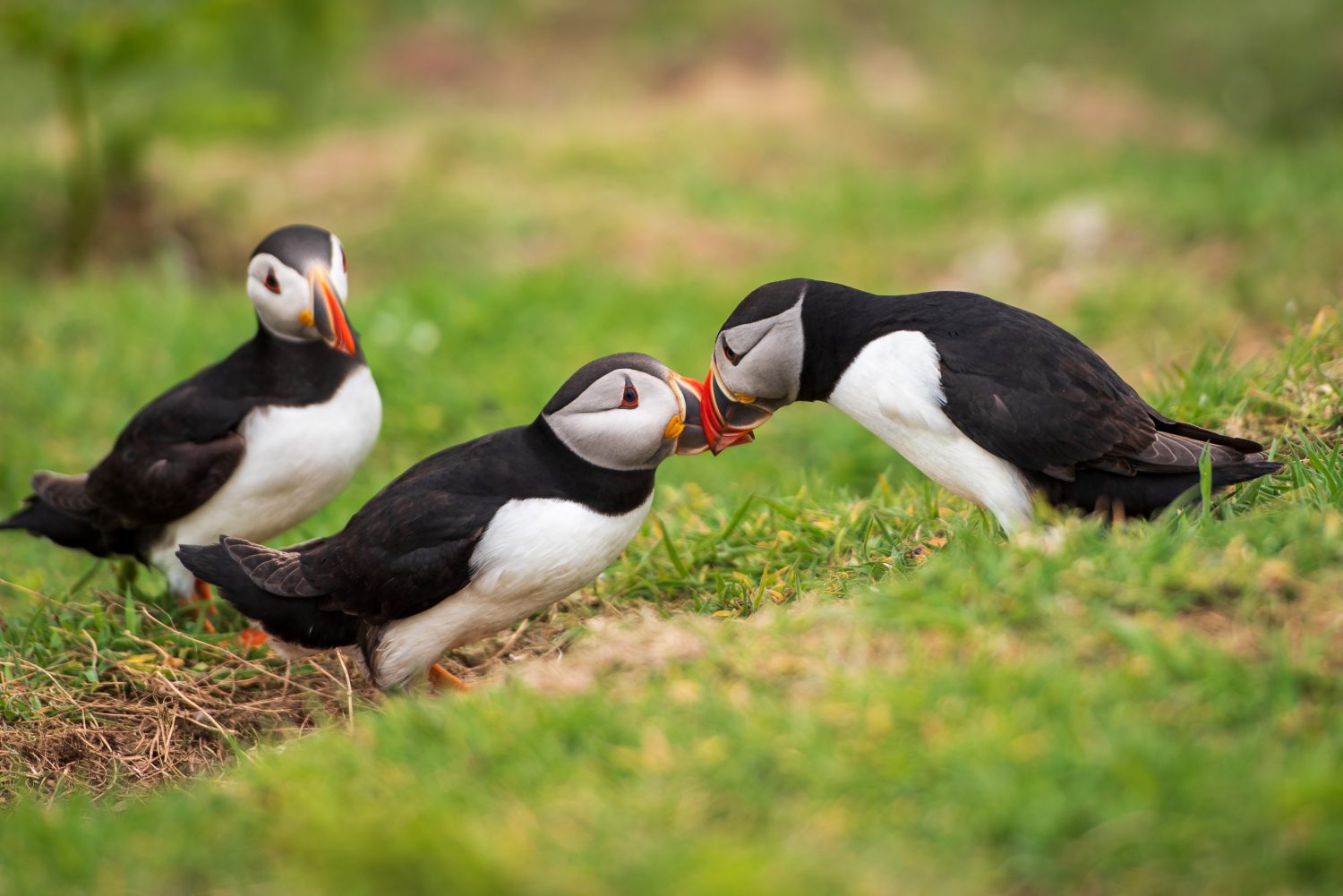 Evidence of human presence goes back to the Bronze Age, in the form of a solitary standing stone known as the Haroldstone and a group of nine small burial cairns. But the most important archaeological remains date from the Iron Age (650 BC – 100 AD) when more than 200 people were thought to have lived here. There are traces of four settlements, a small promontory fort, and some of the best-preserved Iron Age field systems in Britain. In spring, before the vegetation grows up, these ancient field boundaries are clearly visible as lines of stones or stone and earth banks.

The island’s vegetation is pruned by wind and salt, manured and trampled by seabirds, and grazed by thousands of rabbits. Bluebells and red campion flourish in sheltered areas, with thrift and sea campion on the clifftops. There are no trees, although willow, bramble and blackthorn scrub survive in the valleys, and woodland indicator species such as bluebells suggest there were once extensive wooded areas.

The seabirds are a food supply for ravens, buzzards and peregrine falcons, which also breed and feed on the island. Several pairs of chough and a variable number of short-eared owls also breed here.

There are no predatory mammals such as foxes or rats, hence the abundance of ground-nesting birds. The Skomer vole is unique to the island. Toads are present in their thousands, along with some frogs, palmate newts, lizards and slow-worms.

Grey seals are seen on rocks at low tide throughout the year, especially near the Garland Stone. From late August to October the female seals (cows) come ashore to have their pups.

The waters around Skomer, Skokholm and Middleholm are part of the Skomer Marine Conservation Zone, the first in Wales. Here you’re likely to see common porpoises, feeding on fish in the swirling waters. In late summer you may see common dolphins, as well as bottle-nosed and Risso’s dolphins, and also the strange sunfish.