Visitors to Canaston Woods may have been in for a big surprise recently, as the ancient woodland played host to Pembrokeshire’s largest health and wellbeing walk ever, with over 60 people in attendance.

The event was arranged to celebrate the Pembrokeshire Coast National Park’s 70th anniversary and was attended by MIND Pembrokeshire, Value Independence, VC Gallery and Narberth Walking for Wellbeing group.

Run by the National Park Authority, the Walkability Project has now been in operation for over a decade, helping people of all abilities who live in Pembrokeshire to enjoy the spectacular countryside and coast around them.

During the event, participants learned about responsible foraging and were introduced to the sights and smells of native woodland plants that can be used to make tea. The sensory experience was then completed by the opportunity to sample a variety of these teas, which included Pineapple weed/Wild chamomile, Lime tree and Rosebay willow herb, otherwise known as Ivan chai.

Many of those in attendance had an enormous interest in the natural world and were delighted to be able to discover more about it first-hand.

Richard, who joined the event on the day and has been a participant in the Walkability scheme, said: “There are lots of accessible walks at Canaston that are all very enjoyable. I enjoy watching birds, so this is a great place to come.”

Emma, who has already been involved with the National Park Authority as a Youth Ranger, added: “The best thing about these walks is being able to get out and meet new people in the fresh air. It’s good to see new paths being built with wheelchair users in mind, and it makes a big difference.”

For some of the Walkability participants, however, the benefits of getting outside and spending time in nature have run far deeper than fresh air and wildlife spotting opportunities, and have brought about dramatic improvements in communication and social skills.

Walkability Project Co-ordinator Sam Evans said: “It’s well known that spending time in nature is wonderful for health and wellbeing, and it’s been a privilege to observe the effects these walks have had on those who have been a part of the scheme, and also their dedicated care staff, who’ve worked so hard during the pandemic to keep services going – often at great personal sacrifice. I am in awe of how they have conducted themselves during these difficult times and it’s been an honour to be able to give something back.

“The Tea Party was a celebration in every sense of the word – filled with the sound of laughter, singing and the sheer joy of being able to access the beautiful wild places our National Park has to offer.

“However, none of this would be possible without the support of our fabulous volunteers, and I would encourage anyone who has time to spare and a desire to make a difference to consider getting in touch.”

The 70th Tea Party drew to a close with an outdoor sing-along of some well-known favourites, including Rockin’ All Over the World, Delilah and Daydream Believer. Although there were no party bags, attendees departed with colourful handouts put together by Sam Evans and National Park Authority Ranger Vicky Sewell, containing further information on the foraged teas, including instructions on how to brew their own.

Further information about the wide range of volunteering opportunities at the Pembrokeshire Coast National Park Authority can be found at www.pembrokeshirecoast.wales/volunteering. 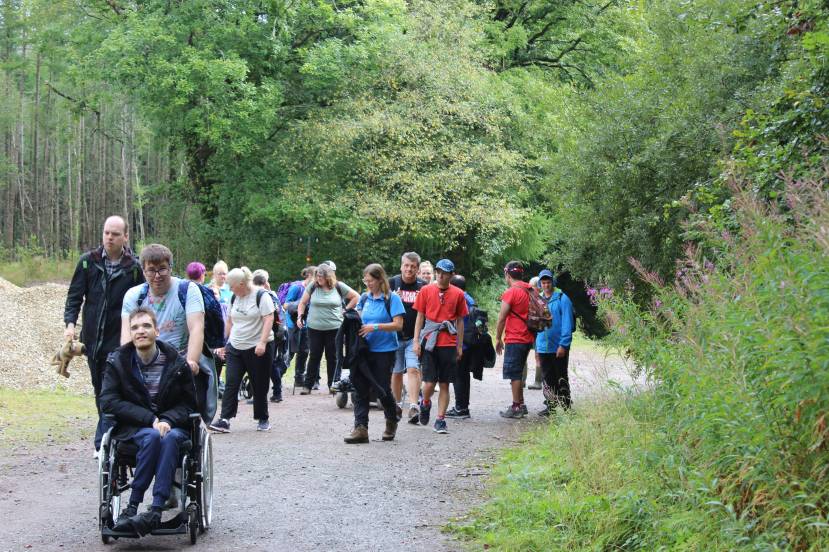