This walk takes in dramatic cliffs, rich heritage and spectacular views. The following description is written as if walking in a clockwise direction.

These days busy Dale is a popular location for sailing and windsurfing but the village has a long sea-faring tradition. In the 16th century it was one of Pembrokeshire’s most important ports and had a reputation as a smugglers’ hideout, while ships were still being built at Dale in the 1850s.

There are sheer Old Red Sandstone cliffs along the peninsula, with a nearly flat cliff-top plateau – the result of wave cut erosion when the sea was 200 feet higher some 400 million years ago.  The Dale peninsula is largely treeless but this walk takes in long slopes down to the sea that are unusual for being heavily wooded.

Dale Fort offers excellent views along the Haven Waterway. The Victorian fort was built inside a far larger Iron Age settlement and was a key part of Milford Haven’s 19th century defences. Now it is a Field Studies Centre for students of marine biology.

Climbing down into Castlebeach Bay is a treat. The little wooded valley has a hidden-away feel and its tiny beach is often deserted. Look out for a ruined limekiln, in which limestone was once burned to make lime for agricultural use.

Beyond the bay the Coast Path climbs towards one of the highest points on the walk giving excellent views of the Haven and across Watwick Bay.

Close by is another defensive structure, the imposing Victorian era West Blockhouse. Now holiday accommodation, its position is well hidden. Alongside it stand three navigation towers – these and the single one at Watwick Point provide a guide to tankers as they enter the waterway. 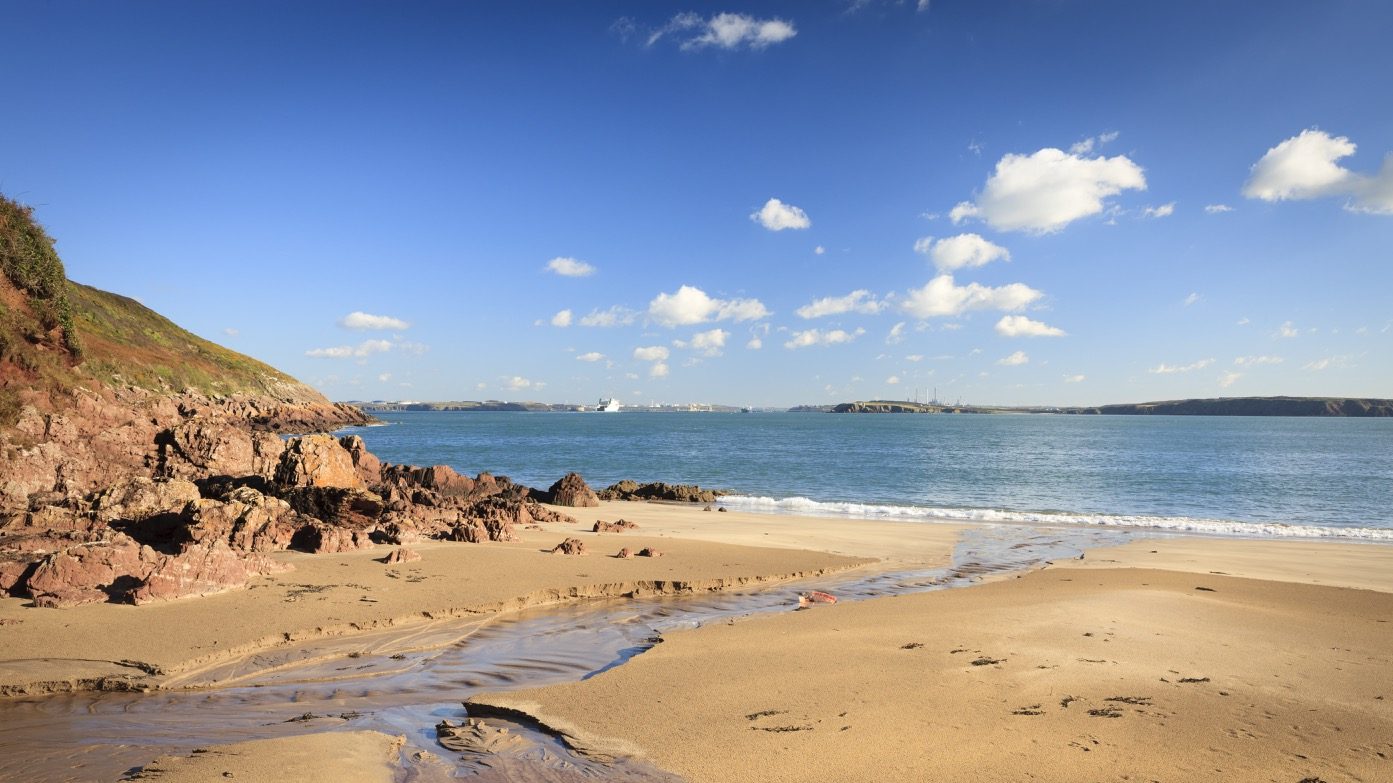 Mill Bay is royally linked by history to a famous English battle. Henry Tudor (later King Henry VII) landed at Mill Bay in August 1485 with a force of 2,000 men. It took Tudor’s force some weeks to reach Bosworth Field, gathering support as he marched. Victory at Bosworth won Henry a kingdom and gave England a Pembroke-born monarch.

St Ann’s Head is the sunniest place in Wales and has some of the lowest rainfall figures in the region, so the chances of great views across the water to Skokholm island are generally good.

At Cobbler’s Head there is some magnificent folding of the dramatically coloured cliffs. Skokholm was Britain’s first Bird Observatory, established in 1933 and like its neighbours, Skomer and Middleholm, is now internationally recognised for its wildlife.

Skokholm is a haven for puffins, kittiwakes, guillemots, gannets and Manx shearwater. Chough, storm petrel, peregrine, buzzard and wheatear also put in an appearance on the island and around St Ann’s Head. Porpoises and dolphins are a regular feature of the waters off the head.

Haydn Garlick, West Sector Ranger for Pembrokeshire Coast National Park Authority has done this walk. He says: “Walkers will encounter choughs, ravens and peregrines and, along the westerly path of the walk, may be lucky enough to find evidence of badger activity.

“St Anns Head houses two out of the county’s six lighthouses, with one being used as a holiday accommodation, and the other providing the only working mainland lighthouse in operation in Pembrokeshire.”

The walk also passes by the site of a major second world war naval base at Kete. It was used during the war as the Royal Navy’s Air Direction School for training radar technicians and fighter direction officers.

The Kete base was then commissioned as HMS Harrier in 1948, being the Royal Navy Meteorology School up until its closure in 1961. Very little now remains of the base and its extensive buildings and roads.

Hear a tale from the calm of Mill Bay, near Dale, to the bloody battle at Bosworth.

Discover the Legend of Henry's Landing on