DISTANCE/DURATION: 2.3 miles (3.8 km) 1 hour 30 minutes.
PUBLIC TRANSPORT: Service bus on A487 412.
CHARACTER: Wooded valley, country lanes, fields and livestock, path is narrow with steep gradients between Coed Glandwr and Allt y Cudyll.
LOOK OUT FOR: Pilgrims Cross, Nevern Church, Celtic Cross in churchyard and castle.
PLEASE NOTE: Parking is provided by the kind permission of the Trewern Arms, please do not consume your own food and drink in the car park.

A walk through woodland and along a river.

Semi-natural woodland like the Nevern Valley provides ideal habitat for badger, fox, rabbit and weasel. Where the path comes near the river Nevern watch out for otters, and salmon, sea trout (sewin) and brown trout in the river. Heron, dippers and wagtails also feed in the river.

The Bleeding Yew (at Nevern Church)
As you make your way through the avenue of ancient Yew trees see if you can find the ‘bleeding yew’ whose seeping sap is blood red. Legend has it that the tree will only cease to bleed when a Welshman is once again lord of the castle on the hill.

The Nevern Cross
This fine Celtic cross dates from the early 11th century and is one of only three of its kind found in Pembrokeshire (the others are at Carew and Penally). It has two inscriptions on its shaft, HAUEN, probably a personal name and DNS, meaning Dominus or Lord.

Nevern Church
This church is dedicated to the early sixth century Irish saint Brynach, who is said to have talked with angels on nearby Carn Ingli, which means “Mountain of Angels”. Part of the present church dates from the 12th or 13th century, although it is thought that it overlies an earlier site. You can find out more about its history from the booklet available inside the church.

The Pilgrims’ Cross
A short way down the path, on the right, you can see the impression of a cross carved in the rock which is thought to date from the medieval period. Pilgrims on their way to St Davids would have stopped here to pray.

This was a popular route, for two pilgrimages to St Davids were said to equal one to Rome. You can still see the worn recess where these early visitors would have knelt or perhaps stepped up to touch the cross.

Geraint Harries, North Sector Senior Ranger for Pembrokeshire Coast National Park Authority, says: “This is my favourite walk. You get a real feeling of history around Nevern – that you are walking in the footsteps of the pilgrims.” 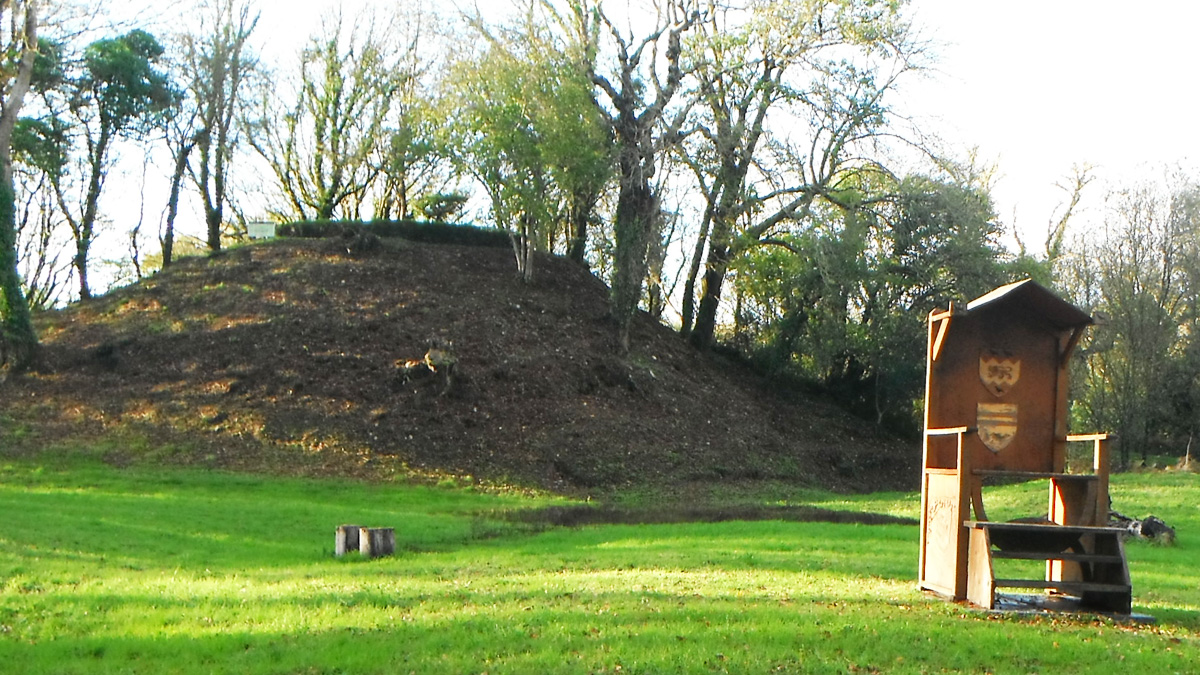 The remains of nearby Nevern Castle are also worth a visit Perched high above the Nant Gamman stream with a steep sided natural gorge to one side and views over the surrounding countryside, this site has been an important defensive location for centuries.

While the remains of the motte and bailey castle that you can see here today probably date from Norman times, it is possible that the site has been occupied since the Iron Age over 2,000 years ago.

You can get to the castle either by walking up the road or along the woodland footpath from near the church.

Nevern’s Medieval past lives on through the legends relating to the castle and the church.

Discover the legends of Nevern on